Over an extended 2 part class, learn how to draw this Moorish stucco pattern that adorns the famous Facade of Comares that would frame the Sultan as he received his citizens on Patio of the Gilded Room.

When this star is tessellated it is then known as the ‘Breath of the Compassionate’ – Keith Critchlow.

This geometric and biomorphic pattern is found in the Alhambra Palace, Granada, Spain. The Facade was built by Muhammad V in the 4th Century.

The eight-pointed star is commonly referred as the ‘Khatam al-Sulayman’ (Seal of the Solomon), and has also been described as the breath of the compassionate which is two overlayed squares at a 45 degree angle.  The square is symboloic of four, representing the earth and stability.  The double overlapping Islamic square pattern adds two fours together, adding up to the  number “8”, which is directly related to the octave in music.  The Compassionate is the highest pronounceable name of the 99 names of God.

‘Traditional ideogram of the four qualities of creation. As well as the four cardinal directions: North, South, East and West, there are the four elements: Earth, Air, Fire and Water; the four physical conditions: Hot, Cold, Dry and Moist, and so on. 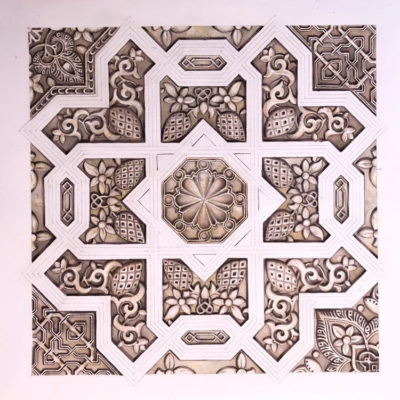